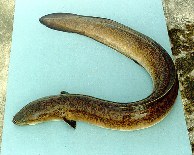 Vertebrae: 100 - 110. Adults have a brownish to black marbling on their back on a greyish yellow background. This coloration can fade away. White belly. Younger specimens are greyish to orange and the marbling is less visible (Ref. 48622). Body color brown speckles scattered on back, sides and fins; yellow between speckles and edge of pectoral fin; belly white or pale blue (Ref. 45563). Head rounded; snout depressed; lower jaw protruded; gill openings small; scales matted-like under skin; pectoral fin rounded; pelvic fin absent (Ref. 45563). Distinguished from all other species by the mottled color and the long dorsal fin, which begins closer to the gill opening than to the anus (Ref. 9828).
Live in freshwater areas as adults, estuaries and seas as young (Ref. 12693). Found in lowland rivers as well as upland tributaries (Ref. 2847). While in river, the sex gland does not develop. But in winter when they move from the stream to river mouth, the sex gland begins to develop as mature individuals go to deep sea to breed (Ref. 45563). The spawning grounds are deep sea gullies among the south of the Philippines, east of Indonesia and Papua New Guinea (Ref. 45563). Are active at night, feeding on a wide range of prey (Ref. 7248, 79840), especially crabs, frogs and fish (Ref. 7248). Thought to breed east of Madagascar where the young are wafted to the East Coast by ocean currents (Ref. 13337, 79840).