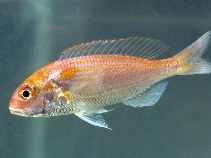 Indo-Pacific. A Red Sea immigrant into the Mediterranean reported from Haifa Bay (2005) (Ref. 72453, 72484). A record of this species from northwestern Australia is unfounded.

Females predominate at small sizes and males at larger sizes, due to faster growth rate in males (Ref. 6254).